About a month ago I decided to go do some storm work in OKC, since the Fort Smith area seems to be dead for construction right now. I decided to camp out instead of getting a hotel room and save some money. So for the last 3-4 weeks I have been camping out by the lake and going to work in the morning. But I have an interesting survival story to tell about some of the things that went down while we were camping. The location isn’t exactly remote in fact it was within city limits on a little spot called lake arcadia. We found a somewhat secluded spot to set up camp and basically just slept out on the ground with nothing but a small pad and sleeping bag. No shelter, no tent! It was great except when there was a lot of condensation on the ground from overnight dew. But I thought it would be a great idea to get some survival training in while I’m out of town. So, I went traveling around the lake looking for food and found some delightfully ripe mulberries. They are so tasty! Their were many wild edibles, to many to mention, but needless to say someone could feed themselves quite easily with just a little gathering.

But what I really wanted to talk about in this story is the crazy fish! Their are more carp on this lake than any other I have ever seen in my life. At dusk and dawn the fish are just everywhere, not to mention all the snakes that like to swim by 4 feet from my bed to say hey at night time. But the fish were nuts! The water was up into the woodline around the lake so you could wade up in the shallows and see them moving everywhere. So needless to say I grabbed my survival walking stick which converts into a spear, fish gig, or blowgun. I screwed on the fish gig around 3 in the mornin and went out in the full moon and started stalking the fish. It was quite amazing to see them in the moonlight and you could stalk up to within a few feet without them seeing you. Before the little hunt was over I had speared two carp around 4-6 pounds and called it quits after that. Don’t like to kill more than neccessary. But I could have easily killed 20-30 fish if I wanted. It was like spearing fish in a barrel. For those of you who have never spear fished before, it is very difficult and this was a rare situation where it was relatively easy. It takes extreme patience and stealth to spear fish in less than the most optimum of conditions, so this was quite a treat to say the least. Seems I learn something new every time I go out! I love survivalism, it truly is the ultimate sense of freedom to know that no matter what happens that you will be able to provide for yourself and others.

I think survivalism is very much like martial arts in a lot of ways. For those of you who have trained in any kind of fight sport, then you know that sense of confidence that training installs in your mind. Survivalism gives you that exact same confidence, but on a whole other level. It not only gives you a sense of confidence, but also teaches you an entirely new way of living that will bring about a higher state of health for the body and the mind! 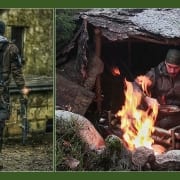 Are You Ready? Urban And Wilderness Survival