My name is Joshua and I have lived in semi-urban environments for many years. I have traveled this country extensively living in wood lots on the edges of towns. In this article I’m going to tell you a little about myself and how I decided to live homeless by choice. Ill also talk about some of the urban survival skills that were beneficial to me along the way.

I’ve been practicing primitive survival skills my entire life and a little over 15 years ago I decided to test abilities by moving to the wilderness to spend a year living primitively. I ended up spending two years out there and the details are listed here in an article called “Alone in the Wilderness”. When those two years were complete I bought a few gadgets that would change my life. The most important one was a laptop computer. With this laptop I began making YouTube videos which became mildly popular (click here for my YouTube channel). I also started advertising myself as an instructor of wilderness skills and began teaching private lessons all over the country. That’s how my urban survival adventure began.

Whenever someone would contact me for a private lesson, I would travel to their area for the class. When it was over I would find a woodlot or a wilderness area near town, preferably by a river, and set up camp for a while. Sometimes I would go into town, occasionally, to use the internet at a coffee shop or at McDonald’s.  I would also take advantage of some of the resources that cities have to offer.

One of those resources is food. We need meat to survive and the city offers us easier meat than the wilderness does. 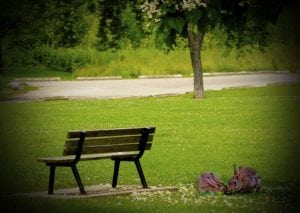 The rabbits in a city are much different than the rabbits in the wilderness. They are used to seeing people so they don’t flee so frantically like wild rabbits do. For me, this was a godsend. I could stalk a city park after dark and almost guarantee a meal. How I did this was with snares and a rabbit stick. Before dark I would walk the edges of a park and set a snare at every rabbit escape route I could find. Then, after the sun went down I would go into the field and run the rabbits, with a rabbit stick, into the snares. Once a rabbit was caught I would run over, step on its head, and pull the back legs, breaking its neck. I know that sounds cruel but it’s actually pretty instant.

Squirrels are also much tamer in the city than in the wilderness. A squirrel pole with snares on it is almost guaranteed to get you food. However squirrels are active in the daytime so you have to be much more discreet if you are targeting them. I have been accosted and threatened by many people who think they are doing the right thing by protecting these animals. These hypocrites have no problem eating a burger from a factory tortured cow and they are a real danger to the urban survivalist. 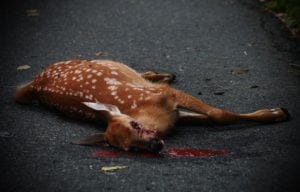 Another easy meat source near cities is the highways and roads nearby. If you check your “road kill trap line” every morning you can generally find fresh meat that is not too damaged, albeit slightly tenderized, for very little effort. It is a valuable resource that not enough people take advantage of.

Of course most cities have a homeless population and cities that do generally have resources to feed the hungry. Churches and the Salvation Army offer meals and groceries for the homeless and I’m not ashamed to say I have taken advantage of them to some extent. However I must caution against becoming too familiar with the homeless people at these places, or becoming dependent on a handout. 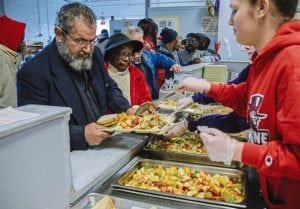 Homeless people can be dangerous. There is a lot of drug addiction and mental illness in the homeless community. I have personally experienced quite a lot of violence and a few close calls in the homeless community Violence is not the only threat though. There are plenty of nonviolent homeless folks as well but it’s still better to keep your distance. If people find out that your living a comfortable life they might want in on it and deplete your limited resources. SO my recommendation is to be kind but not inviting.

Money is another useful resource in the cities. You won’t find much of it in the wilderness, that’s for sure.  there is money to be had in the cities, if you are willing to work for it. There are a million ways to make money on the fly. Maybe, you won’t get rich but you can get by. You can scrap metal, gather pallets, or you can do what I did. You can sell your crafts.

I make money by selling baskets. I have learned that the key to selling baskets is you have to make them in front of the costumer. They want the story. When someone sees their basket and mentions it they have the story of seeing an eccentric homeless guy making them in the park.  That goes for arrowheads, bark containers, or anything else you’re making as well. Sales quadruple when they see you making it.

After a while in one location I would eventually sell another class and off across the country I would go. Sometimes I would hitchhike and sometimes I would take a bus. I have always tried to never own more than I could carry. Possessions are anchors that trap people in place and limit freedom and freedom is like a pearl of great worth.

This article is just the beginning of a series I am writing about how to achieve freedom. I’ll be discussing urban survival skills in depth as well as primitive living skills. Finally I’ll be transitioning into homesteading skills as well. Thanks for tagging along. 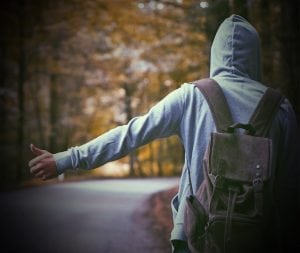 Rites of Passage Scroll to top