As some of you know, I have recently been up in Montana for the last couple of months and I didn’t get to go on near as many adventures as I would have like, but still got some time in the bush. And let me tell you that Montana definitely has some wilderness. It is such a wonderful state for the explorer. There is one memorable expedition in particular that I would like to share with everyone.

One weekend I decided that the tourist trap destinations around Bozeman were not cutting it and I decided to step things up a little. The first thing I did was talk to the locals and ask them how I could find some remote locations that I would not run into a soul. Talked to an old fella that had lived there most of his life and he told me I should take a lil trip up to the Absaroka mountains! Well I took him up on that idea and planned a trip to go see em’. It would be a solo trip and didn’t really have an exact plan laid out, I just kind of turned the wheel where the spirit took me and went with the flow. After traveling down a backcountry road for around half an hour it started to turn uphill very quickly. Before I knew it I found myself as far as the road would take me. It took me to this absolutely gorgeous box canyon surrounded by mountains on all sides. At the end of this canyon was a huge peak with snow still on the peak; keep in mind this was in August at the hottest time of the year.

The ridges are so high on both sides of the canyon that you cannot see the surrounding skyline. I grabbed my ruck out of the truck and took to hiking. Before I knew it I had found a suitable campsite and my senses began to tell me that I should prepare a shelter quickly. I listened to my intuition and began building a temporary survival shelter and wouldn’t you know it; a storm front started rolling over the mountain. I knew I should prepare quickly because this was a new environment and I could not afford to be complacent. I found an overturned burned out tree that had a hollow spot under the trunk just big enough for me to sleep comfortably, so I made camp under it. As soon as I got my shelter suitable, wouldn’t you know it started raining and then it began hailing. As the storm tore through the canyon, I felt invincible in my lil tree shelter because I knew that it would completely protect me from the storm!

The rain was sporadic and somewhat irritating. I would get out to begin gathering and it would start raining. Now I normally wouldn’t mind a little rain, but my go pack got stolen a few weeks prior and I had no rain gear! If it was warm, no problem! But the nights were getting down in the 30’s at night in August, so I decided to stay dry in my shelter. After many hours of this, I started to get a bad feeling again like maybe I should head back. Since it was going to be miserable camping with no rain gear in a thunderstorm in the mountains, I decided to just pack it up and say maybe I’ll come back next weekend. As I packed up I started to feel a sense of urgency come over me and I began to move a little quicker. Not knowing why I was feeling this, I just hoofed it back to the truck. Fired up the truck and started to head down the mountain! Got around the first corner and that is when I knew why I had that bad feeling. The storm had turned the road I came in on into a slip and slide. Let me tell you folks, this was the first time in a long time I have been scared in a survival situation. The cliffs were tall enough that a person could drop a thousand feet without having a single thing to stop them on the way down. This road was lined with cliffs along the whole way and the clay substrate had become as slippery as oil. I started sliding down the incline sideways towards a drop and began to prepare to dump the truck over the side and jump out the other door when I got control again. When I came to a stop I said a little prayer to the creator and told him I’d like to get home in one piece if he could manage it. After that I maneuvered all obstacles out of my way in the truck in case God decided I didn’t need my truck to get home.

Now, I consider myself a pretty good off-road driver. I have taken numerous driving courses in the military including a no holds barred off road humvee class. My truck is no humvee I can assure you, but I knew with a little concentration and God’s helping hand I could get back. I took my seatbelt off and super-charged my awareness!

As I traveled down the mountain I had to carefully slide the truck through narrow corridors in some pretty nasty mud. The problem wasn’t just the cliffs I could go off, I also had to contend with the fact that if I didn’t maneuver correctly I would get the truck stuck. That would be a long hike back to civilization, but it wasn’t the walk back I worried about; I was worried about the astronomical tow bill! Needless to say, after some white knuckle moments I finally made it back down the mountain. If I had not left when I did and had kept riding out the concentric ring of storms blowing through, I don’t think I would have been able to drive off that mountain.

I guess the lesson behind the whole adventure would be. Don’t freakin go into deep bush with bald tires and a crappy two wheel drive truck if you can’t afford the tow trip back. And to get some dang rain gear before you head to the hills. Unless you just want to miserable without it! Because regardless of how good you are at survival there is always a need for human beings to have technology and tools. Whether that technology is primitively made or the most space age modern material, you need to have something or yah just not gonna enjoy yourself! Man is superior to all other animals because of his prowess for making tools. So, don’t leave home without those basic necessities unless you plan to spend long enough in the bush to make them all. And always listen to the spirit that guides you. Some would refer to that as your intuition. Simply put; Go with your gut! 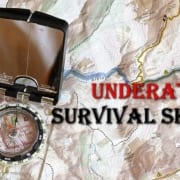