This is gonna be another round of ‘As the World Turns’, starring Robert in the woods. Well we went out this last weekend from Friday afternoon until Sunday afternoon. Got to do a lot of things, so I’ll just start from the beginning. It was a hot night this last Friday and the bugs/humidity were out in full force. We made a fire and got our beds ready. After prepping camp we decided to go forage a bit before dark. The wild edibles were quite scarce and there weren’t many real quick tasty bites to be had. Found some wild plums that I harvested to stuff our roast chicken with for later that night. Also found some Sumac seeds and collected a pocket full so that I could make some of my famous sumac lemonade later. Sumac lemonade is really tasty even without sugar!

The sun fell over the ridge and we stopped foraging to head back to camp! We all pitched in to get the fire cranking and I threw the chicken in the dutch oven to roast up for us. Cooked it for around two hours with fire from below and coals on the lid. We ate dinner and turned in for the night.

The next morning we awoke to start working on the camp but decided that it was miserably hot and that we should go fishing instead. I made some mouthwash from oak bark and sassafras to clean my mouth out and we went to the pond. My wisdom teeth began acting up so the mouth-wash was a great medicinal remedy to keep my mouth clean and to help any soreness from infection.

When we got down to the pond I hooked up a little fishing rig that has always worked well for me in the past. I tied a trot line to the end of a long stick and used a small stick as a bobber. From that stick I tied the bait on to the bobber and used the stick as a way to throw my bait out there. I had killed a copperhead last night and I chopped it up in small pieces and used it as bait. Snake is personally my favorite bait to use because of its ability to stay on the hook for a very long time and the fact that the fish love eating them. Last year I caught ten fish on one tiny baby water moccasin that was not longer than my pointer finger! They really do work great! I put a few fish sets out and then we went to my favorite fishing spot for me to personally watch. As soon as I threw it in we had a hit within less than a minute and a fish on shore. After that we hooked a medium sized turtle that we let go. All in all, it wasn’t a killin but we had caught enough to get some much needed protein. Also made a minnow trap that was highly effective. I caught 5 minnows within the first minute and had a sushi meal in minutes from nothing but a water bottle! The school will be posting a video later on how to make this little trap. I also whittled a primitive gorge hook and showed how to make line out of willow to show the guys how you could catch fish if you had no equipment at all.

The next day a friend and I went up to the cliffs that overlook the whole valley up behind camp. You could literally see for 20 miles up there. With a set of binoculars it felt like there wasn’t anything that we couldn’t see. I whittled a trap while we contemplated the cosmos and enjoyed the cool northerly breeze. The two of us had taken the hard route up the cliff face and needed a little of God’s air conditioning to cool us off. After an hour or so we called it a day and headed back. As we walked we started playing a tracking game that I like to play. One person turns away while the other person walks about 50 yards to a spot of their choosing. When the person tells you they are done, you turn around and track each one of their tracks until you walk up to them. It is a good little drill for training to be able to see tracks quickly in debris and other substrates. You should always be trying to read the pressure releases because they will tell you exactly where the next track should be. After a short game of it we reached camp and I began crafting some trap triggers. Such as the modified figure 4 deadfall and the twitch up snare trigger. We walked down to an area I knew to be filled with game and did some tracking right before dark. We went to a spot I knew was full of raccoon dens. We trained on setting up the snare in high probability locations. After setting the snare we removed them and went back to the road.

I got a feeling that we should go down to the open field by the pond we fished in earlier to check for wildlife. I suspected that we might run into some deer. We rolled up into the field and sure enough their was a small herd of deer just north of us a couple hundred yards away. Then I looked to the east and a doe and fawn had popped out to forage on the field. Adam and I watched them for awhile and then headed back to camp before it got completely dark.

When we got back to camp I stoked the fire to make a smudge to fumigate my tick infested clothing. We had been through some dense bush and I had picked up a slug of seed ticks on my pants. So I took off my pants and hung them over a tripod in order to fumigate the ticks. After that it was time to crash!

We spent the rest of the next morning tracking and looking at different flora around the property. After that we decided it was time to roll it up for the weekend, so we cleaned up camp and headed back for the weekend. This is just a short rundown of our first Sigma III survival weekend to let you know a little bit about what kind of things we are going to be doing. As we progress the weekends will get more intense and will be more training oriented. This was just a little meet and greet weekend with members I have been chatting with for sometime. I just want to take a moment and say that I appreciate everyone coming out and that I hope you had as enjoyable time as I did. Thanks and look forward to seeing everyone in our upcoming classes.

Comment: I had an awesome time! I wish I could have stayed longer, but duty calls. Actually ended up getting a call from the fire department as soon as I got back in town…a little girl went missing in Barling so we did a big ground search. Bummer evening. I’m really looking forward to more weekends at the camp! 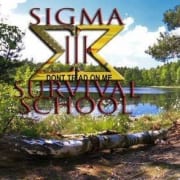 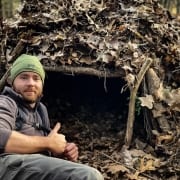 How to Get FREE SURVIVAL TRAINING