Map protractors have some essential functions regardless of their calibrated scale. The three primary functions of protractors for map reading are plotting points on a map, measuring distances and determining azimuths (angles). They are helpful tools for navigating on air, land, or sea. There are different types of protractors for each of these applications. This article will focus on those protractors used with land navigation and topographic maps. 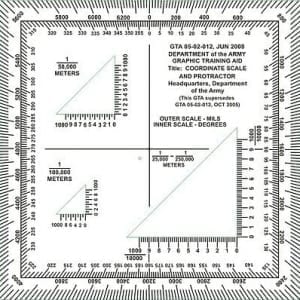 The most recognizable map protractor is the one that is in use with the U.S. military. They are scaled to the Military Grid Reference System (MGRS). They use the metric system for measuring distance and feature both compass degrees and mils around the edges. These protractors are for use with the military topographic maps. This style of the protractor is available on the civilian market. However, some are scaled for commercial maps, like a UTM map, rather than military maps. Also, you can find military protractors sometimes being sold in military surplus stores.

The significant difference between the genuine military protractors and the civilian copies is labeling. There is a label on the military-issued ones that reads something like this:

There are military style map protractors available by civilian vendors online. However, they are prohibited by law from putting the above label on them. Why? Because once a company does that, the product becomes the property of the U. S. government. Since they may not be under contract with the Department of the Army to supply these products, they would be in violation of the law if they put the U. S. Army label on them. A commercial version of the military map protractor is the UTM map protractor. UTM stands for Universal Transverse Mercator. UTM is based on the metric grid square system of measuring distance. It has similarities with the MGRS system. These protractors have two basic styles: the military style and the nautical style. The maritime version of this protractor incorporates both topographic map scales and marine navigation tools. The sailing version looks complicated to read. However, it is not that much different than the military MGRS protractor.

UTM maps and protractors are mostly used for hiking and backpacking. A common way of reading UTM coordinates is “Northing and Easting.” UTM squares are further divided into kilometers similar to the MGRS system. UTM is similar but different from the MGRS system in the way that it is read and annotated on a map. The third kind of map protractor are the corner ruler protractors. These look similar to the UTM and MGRS military-style protractors. However, some of the features are different. Corner Ruler protractors do not have any compass degree markings around the edges. Next, the grid-square scale is upside down. They are designed to find a coordinate with a known grid quickly. They are not intended to find grid azimuth readings on a map and route plotting.

The Corner Ruler map protractor has a primary use in two applications: aerial photography and adventure racing. Their use for aerial photos is to quickly find a point on the photo within an identified grid square. Adventure racers operate on predetermined routes. Therefore, they do not need a tool that helps them traverse over open terrain by plotting a course. They just need a protractor to help find where they are on a known grid-square.

Map reading and land navigation are vital skills for those who love the outdoors. It is also an essential skill for emergency survival. I have found that some trail maps that are available at a trailhead or ranger station are little more than sketches. They are not to scale and are not very accurate. If this is your only map in your backpack and you get lost, a map like that might be your worst enemy.