Three popular survival approaches for the outdoors are commonly discussed in the literature of wilderness and outdoor survival. Outdoor sports are gaining in popularity. For example, in 2017, over 44 million people went hiking and backpacking. It represents an increase of over 12 million participants from 2009. The Outdoor Industry Association’s annual report for 2017 shows that spending on outdoor recreation is $887 billion per year. This means that interest in outdoor emergency survival is also increasing. Therefore, it is essential to know that there are several common approaches to wilderness survival.

The most popular approach to survival is the military or tactical framework. The popularity of dystopian and apocalyptic-themed television programs drives much of this interest. The military or tactical approach to survival finds its genesis in the Cold War. At that time, people feared a nuclear weapons exchange between the United States and the Soviet Union. The nuclear winter scenario is implied in the famous novel and movie The Road. Thus, learning to use military tactics and equipment are the keys to preparing to survive such a comprehensive event.

Those who focus on military or tactical approaches to survival sometimes fail to understand the limitations of military survival. Military survival is designed by the militaries of the world to ensure a soldier survives in combat. The U.S. Army survival manual, FM 21-76, and the SAS Survival Handbook are core pieces of literature in this approach.

A Weakness of The Military Approach

The weakness of military or tactical survival approaches is they have a limited effectiveness of 3-10 days. Military survival assumes several conditions will exist. There will be a resupply of the unit. A soldier can return to friendly forces if they become separated in some manner during combat. The servicemember will be able to be rescued if they follow protocols. The intent of military survival training is not surviving the apocalypse and to reboot human society. It is to help the soldier live in a combat field environment, which includes urban areas. Moreover, those with more specialized skills receive more intense survival training.

The next survival approach is bushcraft or woodsmanship. It is enjoying popularity in the last several years. Bushcraft survival centers on living in a general field environment. The main difference between this approach and the military-tactical approach are the tools and techniques. Additionally, the bushcraft approach is not concerned with surviving a prolonged engagement with opposing military forces.

The bushcraft approach sometimes goes by the name of frontiersman or mountain man approach. The primary skills of this approach are hunting, blacksmithing, trapping, and fishing using the tools and techniques of the nineteenth-century frontiersman. Fieldcraft for bushcrafters focuses on surviving and being self-sustaining for extended periods in the outdoors, much like the trappers or mountain men of the 1800s. The use of various cutting tools, tanning hides, preserving meats, hunting with black powder rifles, trapping various animals, and building temporary shelters or camps are a focus of the bushcraft approach. Consequently, this approach helps people to survive and sustain themselves with a basic set of tools and handcraft techniques such as wood carving.

The Weakness With Bushcraft

One weakness with this approach is that it assumes a continuing availability or accessibility to raw materials, fish and game, or edible and medicinal plants. A worst case scenario of a nuclear winter will contaminate or kill hundreds of square miles of water, plants, fish, and game. It also may result in large areas becoming inaccessible to raw materials, such as iron, copper, shale, or coal due to radiation contamination. Those depending upon this approach to survive should consider an alternate survival method if those natural resources suddenly become unavailable.

The Strength of Bushcraft

One strength with the bushcraft approach is that outdoorsman, especially hunters, gain added skills to help them on long, multi-day treks into the backcountry. Bushcraft skills enable those backpacking or hunting in austere environments to survive or sustain themselves in the event their equipment fails while in the field. Outdoorsman, who become skilled at improvised tools, traps, first aid, and shelters, enhance their chances of survival in an emergency situation.

The third survival approach that also is enjoying some contemporary popularity is the primitive or minimalist approach. Primitive survival focuses on learning the survival and sustainment techniques of the Native-Americans or other primitive peoples around the world. Primitive methods feature flint knapping, hand drill or bow drill fire making, simple trapping, handcrafted weapons and tools, gathering and processing edible and medicinal plants, and building primitive shelters, such as wickiups. Woodcraft techniques also are part of learning primitive approaches to survival.

The Weakness Of Primitive Skills

A weakness with the primitive approach to survival and preparedness is that it takes considerable time and dedication to master these skills for them to be useful in a survival situation. Furthermore, those who suffer from impaired mobility may have limitations on the primitive skills that they learn. However, if one takes the time to master some basic primitive skills, they will be able to exercise more adaptability and flexibility in an emergency situation.

The Strength Of Primitive Skills

One strength of this approach is similar to the bushcraft approach. It allows for flexibility and adaptability in the field. If one loses their knife, they can make one through flint knapping. One can make cordage from surrounding vegetation when necessary. Simple but effective weapons from natural materials can be made should the need arise. One lesson from the Vietnam War is that booby traps made utilizing primitive techniques can be just as effective as sophisticated land mines. Thus, the primitive skills approach to survival in the field is a viable means of ensuring one makes it through an emergency.

There are several ways to approach survival in the outdoors. These approaches have strengths and weaknesses. Some require more time than others to master if they are to be of use in an emergency situation. It would seem, though, that a hybrid approach (multiple techniques) will ensure the greatest amount of flexibility and adaptability in the outdoors. By contrast, the method that one prefers will be one that enhances one’s field strengths rather than weaknesses. It is important to consider that strengthening your weakness while maintaining your survival strengths enhances the possibility of survival in the outdoors. You will have a higher number of skills to employ with a hybrid approach rather than focusing on a single method. Thus, choose your approach wisely, continue learning and improving, and enjoy your next outdoor adventure.

You Can Modernize The SAS Survival Tin

Build Your Own Primitive Arrow Quiver

Jungle Survival; Living off the Jungle 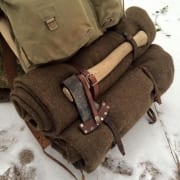 3 Outstanding Wood Choppers For Your Kit

Assess A Survival Situation In 3 Steps
Scroll to top